How we vote proxies to influence change at the corporate level.

Each year, public companies hold Shareholders’ Meetings, where shareholders and company executives discuss many of the issues relating to the company’s governance. The majority of the issues are about confirming members of the Board of Directors, ratification of independent auditors, and executive compensation. There are also many shareholder resolutions on the ballot, often brought forth by relatively small investors, buried at the back of the proxy statements.

“Proxy voting is the most direct way for shareholders to exercise oversight in regard to the corporations they own stock in.” Says Todd Wilson CEO of Portola Creek.

Within shares of publicly-traded companies, 70% of retail investors fail to vote their proxies.

An Example of Proxy Voting in Action

We voted AGAINST an executive compensation plan that could entitle Walt Disney CEO Bob Iger to payouts up to $48.5 million per year. 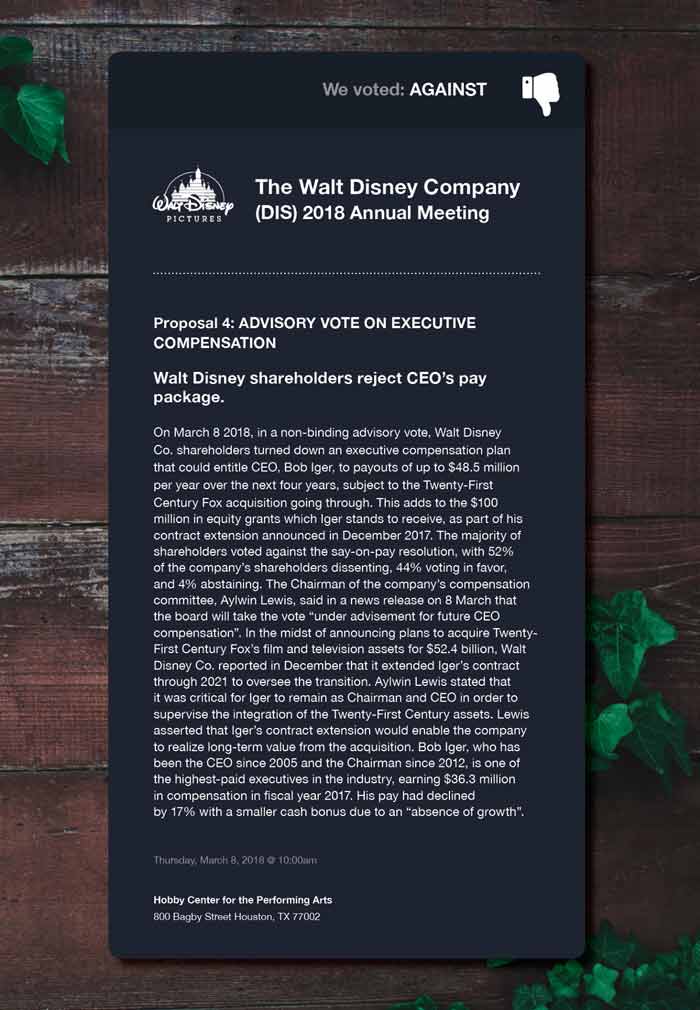 Success! This proposal was rejected.

Along with other shareholders, Portola Creek voted against the consideration of an advisory vote to approve executive compensation, and together we had the majority.

Note: This Advisory vote is non-binding. However, the vote confirms that the majority of shareholders are against this compensation plan. Disney management will feel increasingly compelled to change executive compensation going forward.

At Portola Creek, we are dedicated to research and education.